Mykonos is an incredibly beautiful island of the Cyclades, which is a bohemian Mediterranean resort. The island manages to combine the glamour of fashionable life and landscapes of pristine nature. Its luxury attracts attention of many well-off people, which positively affects the development of business, entertainment and real estate investments. A lot of celebrities and Hollywood stars chose the island as a holiday destination, among regular guests were often seen Nicolas Cage, Mick Jagger, Adam Gontier, Russell Crowe and many others. 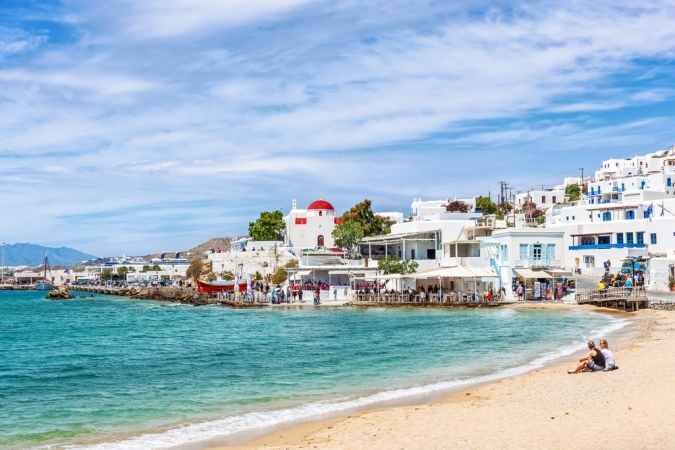 The main town and capital of the island, Chora, welcomes guests with a bright Cycladic architecture and well-developed infrastructure. The main port of the island is located in this town, in its harbour you can find the contrast of the variety of fishing boats and luxury yachts. The town views can be often seen on postcards from Greece. From the ancient times, the citizens suffered from the pirates, so as a defense against raids the streets of the city are built in such a way as to form an intricate labyrinth.

Castro District is the oldest area of the town, it is located on the prominent place from the sea level. In this area you can notice the Paraportiani church, which is here for many centuries now and  is famous for its unusual appearance. White, cube-shaped houses of Chora blind you with their whiteness under bright rays of the Greek sun. In the capital of Mykonos classic Cycladic architecture is combined with  nice modern buildings, highlighting the harmony and continuity of cultural development of the different epochs.

The landmark of Mykonos is its white stone windmills. The silhouettes of giant windmills are visible long before approaching the coast by the Aegean Sea. The mills no longer work as intended. Nowadays there are  various colorful shops and cafes inside this windmills. 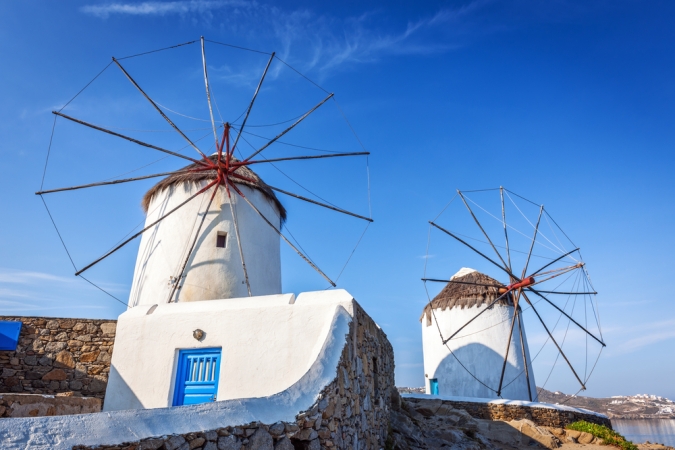 The climate of Mykonos is typical Mediterranean. There are more than 300 days of sunshine per year and precipitations are rare, rains on the island are mostly in late winter or early spring. The average summer temperature is + 28 ° C, and mild winters + 16 ° C. Locals distinguish one feature of the island: the wind here is of two types. The first type is called “sirocco”, it blows during winter and brings thunderstorms. In summer the island is ruled by the wind “meltemi”, it makes a hot summer air pleasantly cool.

The nightlife in Mykonos is famous throughout the world. The choice of entertainment on the island is unbelievably wide. You can start a day with relaxation in one of the trendy bars at the pool, then continue it walking through cobbled streets, then you can go diving, dine delicious traditional Greek dishes, which are prepared on the island in especially tasty manner and complete the day in a bohemian nightclub. In Mykonos there is no place for prejudice and stereotypes. Everybody is relaxed, friendly, liberated and infinitely loyal to all human preferences and interests.

The beaches of Mykonos, which stretch along the coast, provide a great opportunity for a luxury summer holiday. The best of them are sheltered from the wind in the south of the island. The beaches are divided by your preferences and interests. There are quiet and calm beaches, the beaches there you can spend your time with the family and children, luxury beaches with discos, where you can relax to the rhythm of the music around the clock, also the beaches for extreme sports and water sports, there is a nudist beach as well. Here, everyone is resting at ease as they want and like.

The architecture of houses in Mykonos has its own peculiarity. All the buildings are very similar to each other: white stone houses with blue doors and windows. A prestigious house differs from a simple house only by outside shade of blue paint on the shutters and doors.

To buy a property in this paradise will always be a smart move, because it is not only about to spend your holiday, but also to live permanently. Our clients gain the opportunity to admire the views and enjoy the wonderful atmosphere.